Stuart Sumida Anatomical Tips for Animation…in Games and Beyond

The design of animated characters, from photorealistic to caricatured, is most effective when rooted in research and reference. However, the range of characters from humans to animals, to creatures presents a broad, and sometimes daunting challenge. In his presentation, Stuart Sumida can’t cover it all, but he offers a series of rules and principles that cover a wide diversity of potential characters, with examples from traditional hand-drawn animation to computer animation to visual effects to games. He will explain how some standard anatomical concepts help make more effective human and animal characters, and how those can be pieced out and put back together to build creatures with convincing mechanics for the universes in which they live. He will also present a series of common errors that he hopes you can avoid easily, but at all costs! 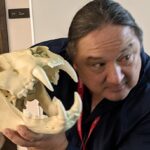 Paleontologist, California State University San Bernardino
We use cookies on our website to give you the most relevant experience by remembering your preferences and repeat visits. By clicking “Accept All”, you consent to the use of ALL the cookies. However, you may visit "Cookie Settings" to provide a controlled consent.
Reject AllAccept All   Cookie Settings
Manage consent